The Best Places for Everything Featured 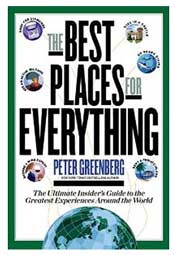 Travel writer Peter S. Greenberg offers some warm praise for Globe Aware in his latest book, The Best Places for Everything: The Ultimate Insider's Guide to the Greatest Experiences Around the World.

On the Chapter titled "Voluntourism", Greenberg lists some of the great organizations that offer amazing volunteer vacation experiences. “Globe Aware offers 1-week volunteer vacations that combine hands-on experiences with cultural activities. To get the most for your travel dollar, look for destinations like Mexico, Laos and Cambodia where you can get accommodations, meals, excursions and volunteer activities for about $1200 a week. Projects vary, but in Cambodia you might teach English at a Buddhist school or get involved with a children’s center in Luang Prabang. www.globeaware.org”

Greenberg, CBS News Travel Editor reporting regularly on The Early Show, its replacement CBS This Morning, and the CBS Evening News, is best known as the Travel Editor for NBC's Today, CNBC and MSNBC from 1995 until 2009, says he wrote The Best Places for Everything because he is “constantly being asked by just about everyone to name my choices for best, and the travel categories are almost endless. After resisting for many years (partly because I didn’t think I could give it the completeness it needed,) I’ve now been able to compile the Best Places for Everything. Its based on my personal travel history of comparison and constant points of reference, relevance, and long-term value. In this book, I answer the question of “best” with a caveat: It’s not done in an arbitrary way, but by personal experience, measured by relative terms, not absolute or impossible ones.

“I was at an editor’s conference, and an Indiana newspaper’s travel editor said: ‘We feel that if we don’t have something nice to say about a place, we just won’t say it.’ I couldn’t believe a professional journalist would make such a statement! I immediately stood up and challenged him. ‘If that’s your philosophy, you should resign,’ I said. ‘You’re being irresponsible to your readers. What you are describing is a newspaper that is an advertising vehicle for the travel industry, and as such it has no credibility.’ There is no room in travel journalism for quid pro quo approaching to reporting. From that moment, I’ve kept a running file of my own bad travel experiences (compiled in his book titled Don’t Go There about all sorts of places and companies he does NOT recommend).

Greenberg has visited every U.S. state multiple times and 151 of 196 countries around the world. “With each trip, my list of where not to go grows. I know I will be accused of being unfairly subjective and that I have somehow violated the spirit of travel journalism by not being a promoter of travel. Well guess what? I have never worked for the travel industry. I report on it - - good(and sometimes very good), bad, and yes, quote often ugly. Travel writing is not being part of a popularity contest. Like all other reporting, it’s about presenting—not promoting—facts that allow people to make reasonably intelligent, independent decisions about choices available to them.”

Tweet
Published in News Articles
More in this category: « Voluntourism films inspire others Everyday Ways to Give Back »
back to top